In his film Korankinder, director Shaheen Dill-Riaz enters the secretive world of the Madrassas in Bangladesh. At those conservative Islamic schools, children and adolescents spend their days hovering over the holy book of Islam, the Koran. Their goal is to earn the honorary title of Hafiz, which is bestowed upon a Muslim who has memorized the entire Koran.

Twelve hours each day for at least two years. That is how long it takes the average student to memorize the 6,236 verses of the Koran.

It is a monumental task the children at the Hifz-Khana Madrassa, an orthodox Islamic school, face. Most of the parents are happy to enroll them there, but how about the children themselves? What motivates them to learn over 6,000 verses in a language they do not even understand? With these questions in mind, filmmaker Shaheen Dill-Riaz set out to find some answers.

As it turned out, this was no easy task. Cameras and filming were strictly forbidden in the views of many conservative or orthodox Muslims. Dill-Riaz spent a lot of time trying to  convince the right people. But his efforts finally payed off and he gained unprecedented access to several Madrassas in Bangladesh.

Korankinder: A fascinating film about the secretive world of the Madrassas 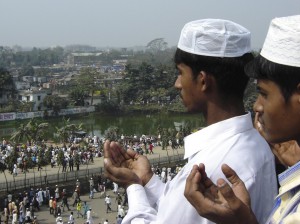 Korankinder is a fine-grained and sensitive film about a unique religious practice which strongly contradicts all notions of a carefree childhood. It is a topic Shaheen Dill-Riaz frequently focuses on – most notably in his later films, such as The Networker or The Projectionist. In Korankinder, Dill-Riaz explores the hopes and dreams of these students, without ever judging their motives. That of course does not keep him from asking questions.

Dill-Riaz shows the anxieties and afflictions which motivate parents to choose these schools for their children. But can children compensate their parents’ anxieties?

With this question in mind, Dill-Riaz embarks on a journey through his homeland of Bangladesh, a country torn between religious stringency and secular ideals. Korankinder delivers some answers, but raises poignant questions as well.